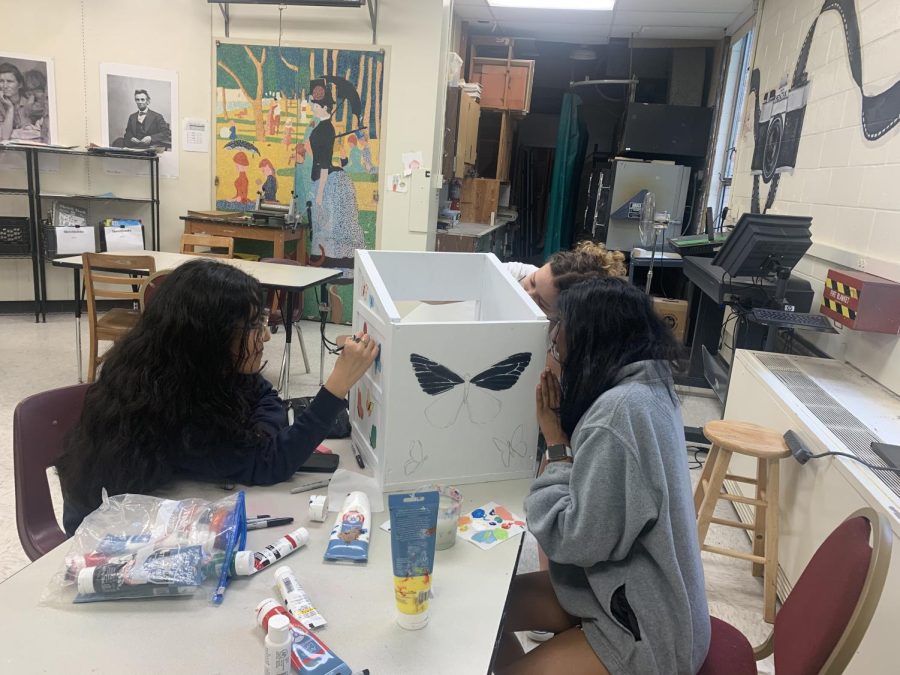 Members of the group putting together The Lending Library at work

As we near the end of the year, most students find themselves winding down with extracurriculars and focusing on their final exams. However, some students have been making the most of these last few weeks by giving back to the community of New Providence, all while honoring a lost classmate.  They are doing this through the newly created Lending Library.

In July of 2020, the NPHS community lost 17 year-old Julia Prasad to a tragic accident. Almost two years after her passing, Prasad’s parents proposed the idea to their daughter’s high school of creating something as a memorial of their daughter, who had been a staff member of the literary magazine Per Scripturam.

“Unfortunately, she wasn’t able to be a part of the magazine in her last year,” said senior and project member Durga Venkatesan, “so her parents asked for a lending library because she loved reading.”

The Lending Library is essentially a community bookshelf, where residents of New Providence can check in and check out books whenever they like. Members of the town have continued to show their ceaseless support for the Prasad family by donating books. Families without children have even been donating books, contributing to the five boxes worth of books that will soon be displayed in the bookshelf.

“I think a book can go a long way,” said Venkatesan. “When you read, it gives you a new perspective. And if you learn something new, it’s just a great way for the community to connect over something. Bringing some light and saying this is how we’re going to memorialize [Julia] is something special.”

Venkatesan predicts that the bookshelf should be done within the next two weeks, right on time for the end of school. The physical bookshelf has already been built, and the finishing touches of painting and adding colorful designs is next on the list.

That being said, the process of putting together this bookshelf and collecting books goes deeper than creating something for the community of NP; it is really about honoring the Prasad family and their daughter Julia.

For Venkatesan, joining in on the project was especially hard at first since she and Julia were neighbors and childhood friends: “It’s weird because how I treated her passing was I didn’t really accept it because it was my first experience with death. You think she’s there at times, but she really isn’t and, I guess, doing something for her was nice to feel like she was still here anyway.”

While this time of the year may be difficult for those who knew Julia personally, those who didn’t get the chance of knowing such an amazing NPHS student should take part in the Lending Library. Dropping off a book may seem like a simple task, but the impact it will have on the Prasad family and the person it reaches is something worthwhile.