Bridge the Gap: Why Is It Taking So Long to Fix the Mee Lane Bridge? 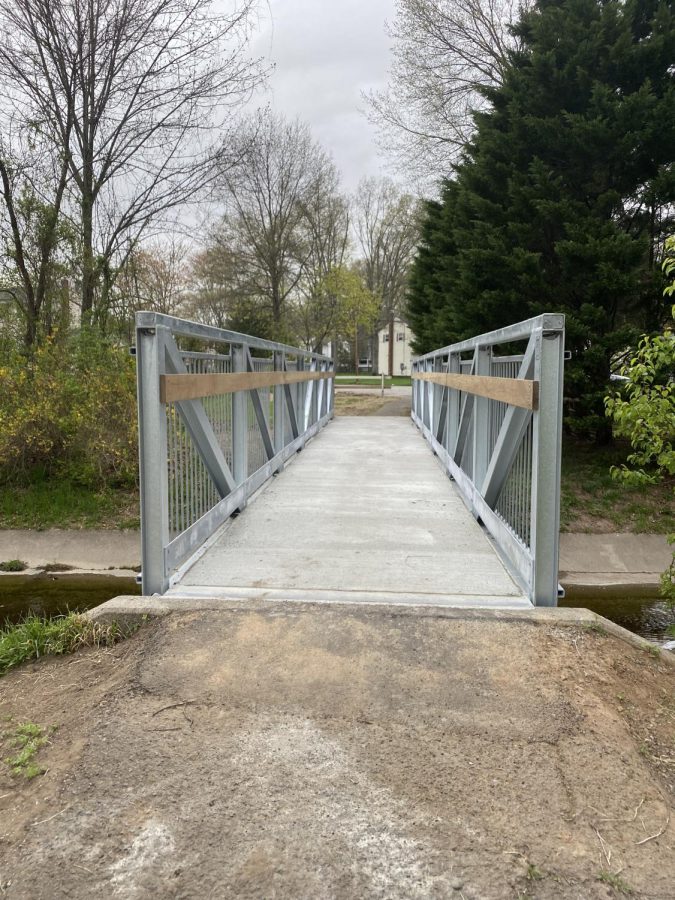 I wake up in the morning, walk the dog, eat breakfast, clean up, pack my school bags and begin my walk to school with my two younger siblings and our two friends.

But as we make our way to the bridge we normally cross on Mee Lane to get to the High School, we notice caution tape and a large block of cement closing off the bridge.

I stand at the foot of the bridge, puzzled. Then something my mother read to me earlier that morning made me “ohhhh” out loud: “After completing their post-Ida inspections of the pedestrian bridges at Dunlop Street, Mee Lane (N.P.H.S.) and Commerce Street (AWR), the Borough engineers have informed us that these bridges were severely compromised during the storm. Effective Thursday, September 16, 2021, these bridges will be closed. Please plan an alternate route as we work through the time-line for the replacement of these bridges.”

All members of the New Providence Borough received this email about a week earlier to ensure that students, parents, or really anyone who used any of those bridges would have time to find new walking routes.

My siblings, my friends, and I shrugged and crossed below the bridge. It had not rained in a while and there were several sturdy rocks and logs to help us cross over.

A week later the construction team put up a makeshift fence around the entire facility, cutting off any sort of travel across that route. Several bikers and other passer-by tore down the fence and continued going under the bridge. My group followed. We did not once cross over the bridge, only alongside it.

This project began in September after Hurricane Ida. It is currently April and the bridge is no closer to being finished.

Miss Holika, a resident on Mee Lane, expressed her annoyance with the slow construction as her daughter now must take a longer route to get to school: “My daughter cannot use the bridge [and she has to get to the high school quickly because] she takes the bus from the…high school to go to Magnet.”

In several people’s eyes it’s an easy solution: leave for school earlier. This is an obvious solution, but there are counter arguments supporting the benefits of a shorter, easier route for students than a farther detour.

Holika says that “this was a really critical bridge…I was worried about that. [When the bridge was closed], kids were using the bridge and I was not sure if kids should utilize that and sometimes the canyon is flooded.”

Student safety was crucial, but what of the residents’ safety?

Adam Dabney lives on Radcliffe Drive and has a different opinion on the construction.

While he and his two sons would ride their bikes across the bridge on nice days, it hasn’t affected his travels as much. In fact, he enjoys the longer rides as he spends more time with his sons and stays in the nicer weather for longer. In terms of safety, he states “we would see a lot of drop offs and pickups from our block, which we don’t see anymore. I appreciate [it] because there’s less car car traffic,  [especially with] kids playing [outside].”

The less car traffic, the safer the Dabney kids and other children along the street are when they play outside.

Others who live on or near Mee Lane and Dunlop Street are indifferent.

One resident on Mee Lane states how, despite the project being in his backyard, the construction hasn’t bothered him or his family. While they may have used it every once in a while during the summer, the colder months have prompted them to stay home and there has been little noise since not much construction has been organized.

Another resident, on Dunlop Street, Brian, states “how it’s a very nice convenient bridge to have for the community to cross” but how there hasn’t been much controversy over it since the “the traffic [in the area] seems pretty normal. Maybe some of the people that used to cross it more regularly have gone a couple streets over.”

Despite whether they use the bridge often or not, residents are still all wondering the same question: When will construction be completed?

Dabney has a background in construction and states, “I’m not surprised at the slowness of how the project is going. I’m assuming they had to secure funding from a federal agency.”

He suggests that “They tried to claim that it was damaged from the hurricane so they wouldn’t have to then pay for it by themselves.”

Kevin Boyer is the head construction manager of the project for the three bridges. He understands that several residents, including myself, have all been wondering the same questions and explains that several steps need to be considered before the building process even begins.

All three bridges are “regulated by the state of New Jersey DEP (Department of Environmental Protection). So they require you to come up with the design plans and show that your proposed bridge is going to be pretty much the same exact thing that was there prior. So post the storm in September, everything was demolished [and] taken down because it was unsafe. From that point on design started for the new bridges which had to meet up the existing abutments that took a few months. And then once it gets designed, it goes to a manufacturer who goes to the process of redesigning it to make sure everything will fit into this space that is given. Once those drawings are approved then they [start work], or the delays in the project are caused because of the fabrication and the availability of material and also the workforce.”

These bridges in New Providence had weak support beams and when bridges are unsafe “they have to be decommissioned or torn down so that nobody would use them. Unfortunately, there’ll be a gap in time between that point and when a new bridge gets put in place.”

The timeline of when these bridges were actually damaged seems a little unclear. I asked Boyer to clarify why the Mee Lane and Commerce Street bridges had not been fixed sooner when they had shown potential damages such as missing, broken, or rotting planks before the storms.

His response was: “At that time those bridges were considered safe. It’s just more of a maintenance thing in place. [When] planks are loose or coming up, they get replaced.”

Now that people understand why and how the bridges will be replaced, this leads to the major question that many parents are concerned with: Will my tax dollars be used for supporting this project?

Boyer stated that “This funding is all entirely state funded by FEMA. And it costs several $100,000 per bridge. It’s fairly expensive to reconstruct a bridge.”

So if the state has the money and the town knows what it needs, why has it taken over six months for repairs? Much of the work is “dependent on the manufacturer and equipment and unfortunately, many bridges throughout the entire state were damaged. So it’s kind of fighting for material now.”

Boyer asks residents “to be patient because material is very hard to come by now, and contractors are very busy”.

As of right now, Boyer expects that new materials for the bridge will arrive at the end of May meaning that construction should begin in June.

As of April 25, 2022, the bridge at Mee Lane is open for community and residential use. Please be aware of further construction along the surrounding community streets.