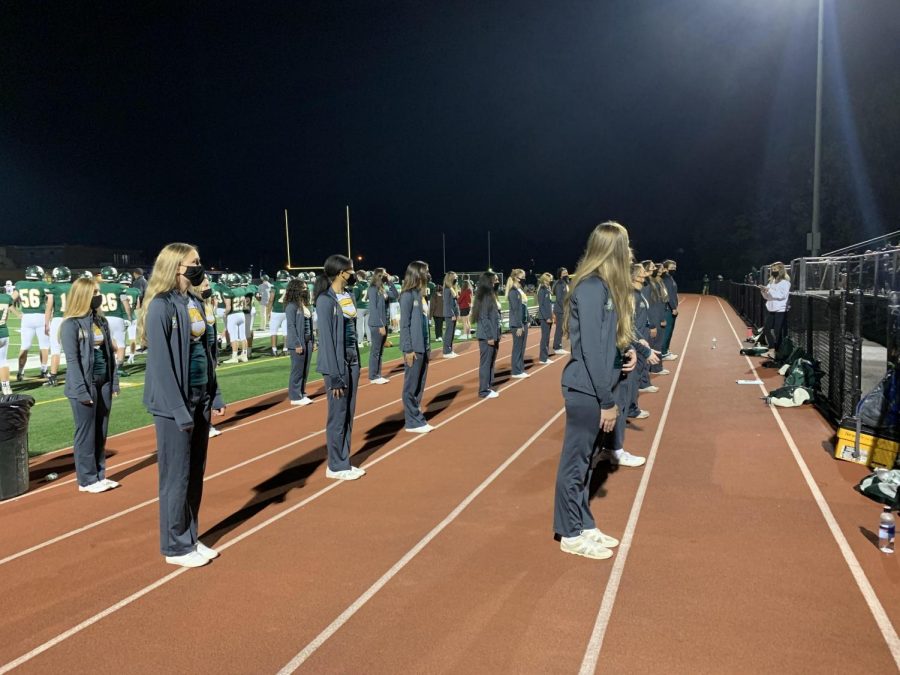 One sport at New Providence High School that has been affected by the COVID-19 pandemic is cheerleading, a very high in contact sport whose pre-season was pushed back an entire month.  But, predicably, the cheerleaders, led by a new coach, are working hard and having fun despite it all.

Claudia Ralph, the new varsity and head cheerleading coach, has participated in cheer all her life, including being a Division One cheerleader at Seton Hall University. Once Coach Ralph could not cheer anymore, she knew coaching was for her. She loves to teach and give cheerleaders the experience that she has had. Coach Ralph sees being an honest coach and having a lot of experience with cheerleading as being some of her best qualities as a coach. Now she gets to take on the role of instructing stunts and putting cheers and half time routines together for game day, which was her favorite part when she was a cheerleader.

Rachele Petronella, the junior varsity cheer coach is in her third year of coaching. She started as a PAL New Providence cheerleader and was captain of her senior year varsity team at New Providence High School.

Coach Petronella explained how much of an impact the pandemic has already had on this cheer season: “Any cheer camp we wanted to attend this past summer, we wanted to do the CJA camp in Kenilworth and we had to cancel that, which would’ve been really great because those are some really experienced coaches and cheerleaders.”

Senior Mia McCarthy, one of three varsity captains, explained how the cheerleaders are “no longer able to have team dinners at the school and [they] can no longer cheer at away games.”

Other than not being able to carry on the tradition of having team dinners and bonding, Gabrielle Arace, one of the other captains, included that, “The entire season was pushed back to October to allow all teams to go through the phases before starting the season.”

The new rules due to COVID-19 are not just for varsity but also for JV cheerleaders. No cheerleaders are allowed to go to any away games, so the amount of games they can cheer at are way less than previous seasons.

To keep safe during this time, Coach Ralph explained that the cheerleaders do  “what the school tells [them] to do, so everyone wears a mask, except when they are getting water and when they are doing high intensity aerobic training.”

Everyone is required to stay apart from each other, other than stunting. Because stunting requires such close contact between cheerleaders, careful precautions have to be taken when off the field, and everyone on the squad is working hard to stay safe and healthy during this time. JV cheerleader Lacey Schmidt makes sure to limit who she is around without a mask on and makes sure to stay six feet away from everyone and is always washing her hands and wearing a mask when needed. Coach Petronella is only spending time with immediate family members and close friends, making sure to be wearing a mask, and staying away from anyone who thinks they may have it or have symptoms. Everyone is trying to stay safe on their own and trusting their teammates to also following guidelines and not come to practice if they are not feeling well. Freshman cheerleader Theodora Petses mentioned that she trusts everyone on the team and hopes that if someone was sick or was not feeling well, they would email both Coach Ralph and Coach Petronella and not show up to practice.

With everything going on in the world right now, it is harder to stay safe and enjoy being around others, yet these four cheerleaders and two coaches proved how they are all staying safe, having fun and hoping for the best season possible! Coach Petronella wants to remind everyone to support the cheerleaders because they are working hard to do the best they can do!