Every 15 Minutes: the Immense Impact and Importance 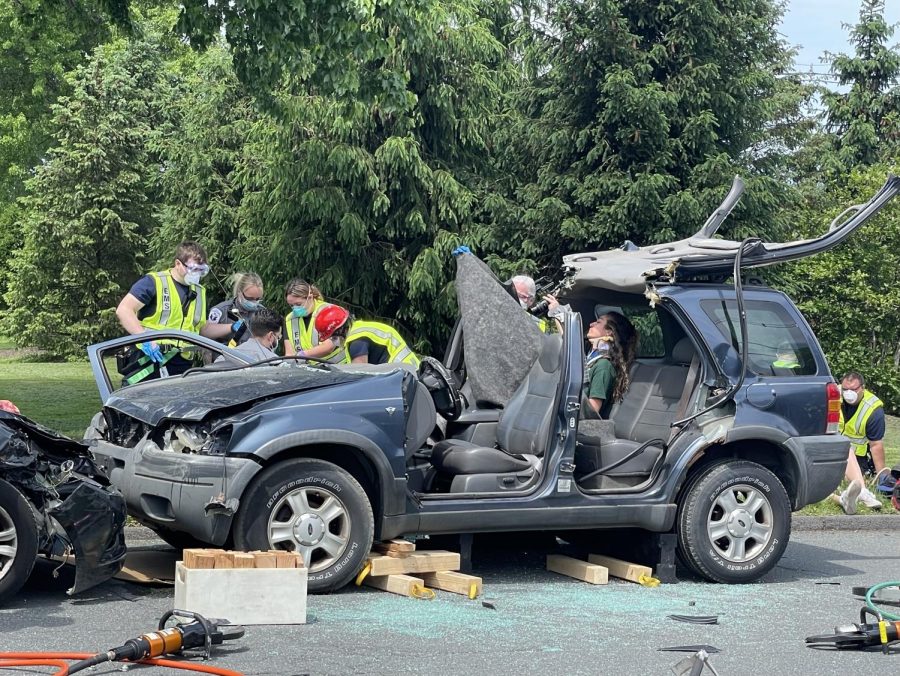 Every 15 minutes someone dies in a drunk driving accident. This statistic was presented to upperclassmen on May 23rd through a jarring model crash as part of the Every 15 Minutes program. The following morning, an emotional video was presented, showing the death of three beloved students and the court process of sentencing the drunk driver. While students are deeply impacted by this video, what planning goes into this forceful event, and what impact does it have on the community?

Starting in the fall, planning for Every 15 Minutes begins. This is a huge undertaking, and multiple parts of the community come together to orchestrate the event.

The NP Municipal Alliance funds the program and works with the community and school to have all aspects covered. This includes holding meetings, planning with the film crew, and organizing the student assembly.

In addition to the Alliance, the NP Police Department also plays a pivotal role in curating the Every 15 Minutes event. Detective Rodriguez is the lead officer for planning the event. He’s responsible for organizing the crash vehicles, meeting with the prosecutors and defendants, and planning the crash and courtroom scene. They also contact EMS and the fire department to ensure that they will be “responders” at the scene.

In the past, the Atlantic Medical group has provided a helicopter and hospital room for the event. However, COVID-19 setbacks have restricted this ability.

On the day of the event, all of these groups come together to interact with the students. Mr. Chango, NP Alliance Member and NPHS counselor, selects a group of upperclassmen to participate in the program.

Mr. Chango said: “It starts in the fall when I get names of students from the guidance calculator that would be good for the program. Typically when I get between 25 and 30 students is when I stop recruiting, and then from there it’s a matter of making sure we have all the bits and pieces in place.”

Over the school year, students audition to be a part of the accident. The film crew picks ten students to be involved in the accident, including a drunk driver and passengers. This year, junior Owen Newcombe was selected as the drunk driver.

“When I first got the role, I was kind of excited about it because it’s something I’m not used to doing. The closer I got to the event, the more nervous I became,” said Owen.

Starting at the beginning of the school day, students in the accident are called down to begin the filming process. Goulish special effects makeup is put on all students for this process. Throughout the school day, the other students are part of the Walking Dead. Every 15 Minutes, a student is announced as dead due to a drunk driving accident, and they return to class as ghosts for the remainder of the school day.

Later in the day, all upperclassmen are called to witness the gruesome crash take place. Parents are also welcome to view the event.

Owen Newcombe said: “Once the tarp gets pulled back, you get a rush of emotion and it all feels very real. It was very scary and nerve wracking.”

Once the school day ends, the student participants are taken to the Municipal Court room to watch the sentencing. During this time, parents of critically injured victims give their impact statements, and the drunk driver is sentenced to thirty years in prison.

Later that night, students are called back to the school to discuss the importance of Every 15 Minutes and write impact statements from their experiences. While the students usually stay in a hotel overnight, this did not take place due to budget restrictions. The next morning, an assembly is held to view the Every 15 Minutes video.

“You’ll see the biggest impact when they’re showing the video. It’s very, very quiet. When you use them people get a little emotional. It’s the same when the students get up and give their impact statements,” said Mr. Chango.

Every 15 Minutes was first initiated at the high school in 2010 by Tracey Beckerman. Since then, it has taken place every two years. This year was the only exception, as it was pushed back from 2021 due to COVID.

Mr. Chango said: “The purpose of this event is to be a more graphic representation of drinking and driving to get student’s attention more. We always do it with close proximity to prom because many people go away that weekend. We want them to be safe and keep an eye on each other.”

Over prom weekend, the topic of alcohol is likely present, and students need to be able to make the right choices.

“Even if this video makes one student make a different choice that has better consequences, the program really is worth it,” said Mrs. Smith.

The community feedback encourages this event to continue. Students are highly responsive to it, and parents appreciate it as well. For example, Mrs. Smith has helped with this event ever since 2013, where her son was involved in the accident. As a parent of someone in the accident, it is especially moving. Following that, Mrs. Smith has continued to help organize the event through the Municipal Alliance and as a parent.

Mrs. Smith said, “Parents are not far from this being their worst nightmare of their child being in any kind of accident. Certainly one that can be prevented, so it helps them have that conversation with their children. Overall, this is a great community event where you see everyone working together because we care about the safety of our students and children.”

Every 15 Minutes is a moving opportunity for the entire community to work together for the safety of the students and children. It’s success is seen among students and all of New Providence, encouraging everyone to make safe choices that can truly impact their lives.